I have heard of Lakeview Milk Bar on Brigade Road as a ‘cult place’ and had wanted to drop in for a while, but never got the chance. When wife suggested we visit the flea market at MG Road station and all the roaming made us hungry, I jumped to suggest Lakeview as an option.

The word milk bar first brought to my mind another ‘cult’ scene from Tarantino’s Pulp fiction – the one with the ‘five dollar shake‘. The simple milkshake with ice cream that totally surprises John Travolta.

I went in expecting a bar with kickass milkshakes (which i still think you get there), but my build up was doused with cold water when I read the menu referring to the place as an ice cream parlour. So much for disconnect – if you call yourselves a milk bar, why don’t you go the entire way? Maybe make waiters dress in cowboy clothes and hats and serve the milkshakes? Nerd pickup place maybe? 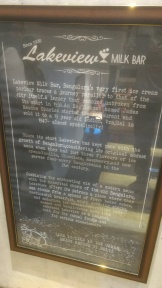 Lakeview’s ambience is not any of what I had described above, but a quiet family place, with bright lighting and wooden panelling. They have a picture on the stairs that describes their history and a few pictures calling out some specialties. I did not check out the counter which has pastries and bigger cakes, but maybe you can.

Nevertheless, self, wife and friend got a table on the first floor. I opted for a banana split, as the name brought back memories of another cult story, Roald Dahl’s wonderful ‘The Umbrella Man’. Wife was a little hungry and opted for a chilli cheese toast with a red velvet sundae. Friend picked the garfunkel, I think because it sounded sophisticated.

Chilli Cheese Toast arrived first and was a good start. The folks back in the kitchen hadn’t bothered too much about the presentation or the cutlery, it was 4 pieces of toast on a plate that could have been gleaming some more. But the toast was delicious, it was soft, with the appropriate amount of cheese and not too spicy. We all tried it and smacked our lips.

The garfunkel is a different representation of the banana split. You have the bananas sliced, and served with vanilla and chocolate ice cream, with a dash of strawberry sauce. The last addition is the differentiator, and separates the split from the garfunkel.

By the time I’d finished the split, I thought I’d had enough ice cream for a while, but wife’s red velvet sundae came fashionably late (according to our instructions though). Relentlessly, we dug in, but by then the cake, the ice cream and the chocolate sauce had all become too much, I couldn’t even say if the red velvet was great.

The service was decent, I reckon they could do with one more waiter or so. The waiters seem polite, and while presenting the bill quietly mentioned that they have not included service charge, and if we liked the service, we could add a tip. This was definitely a surprise, a welcome one at that. I liked the service and this adherence to the rules, so I did leave a tip.

I would drop in to Lakeview definitely another time to have their milkshakes, and maybe some toast.

My Zomato review for this can be found below.