The past week has been so busy that I’m reviewing last Saturday’s dinner now only. Possibilities are that some granular details may be missed because of the delay, but the overall experience was memorable enough that I’m not worried of a speculative write-up.

Planning to drop by at Biere Club, on a Saturday evening and without a reservation seems to be the very definition of a thoughtless plan. That is what we did and to our cost found that we were not going to get any seats – until they closed down for the night maybe. Add to that the mind scrambled lady managing the reservations at the front desk – she seemed lost and helpless and asked us to contact the waiters/manager inside for seats. In turn, they seemed ambiguous about the availability of tables and gave us arbitrary time intervals to wait – 15 minutes or 20 minutes – over the course of 45 minutes. Get it together guys!

Realising that this was going to go nowhere, we started exploring other options. Fisherman’s Wharf, sodabottleopenerwala and The Glass House were the nearest choices. Ruled out Wharf as I have felt from my past visit to the Sarjapur outlet that they are overpriced and the food isn’t good enough, and The Glass House is more of a date spot – that left us with sodabottleopenerwala – which was fine. I’d previously dined here during Christmas 2015 – and had tried only couple of appetizers – cutlet and french fries- and was really impressed. This was a good chance to check out their main offerings. 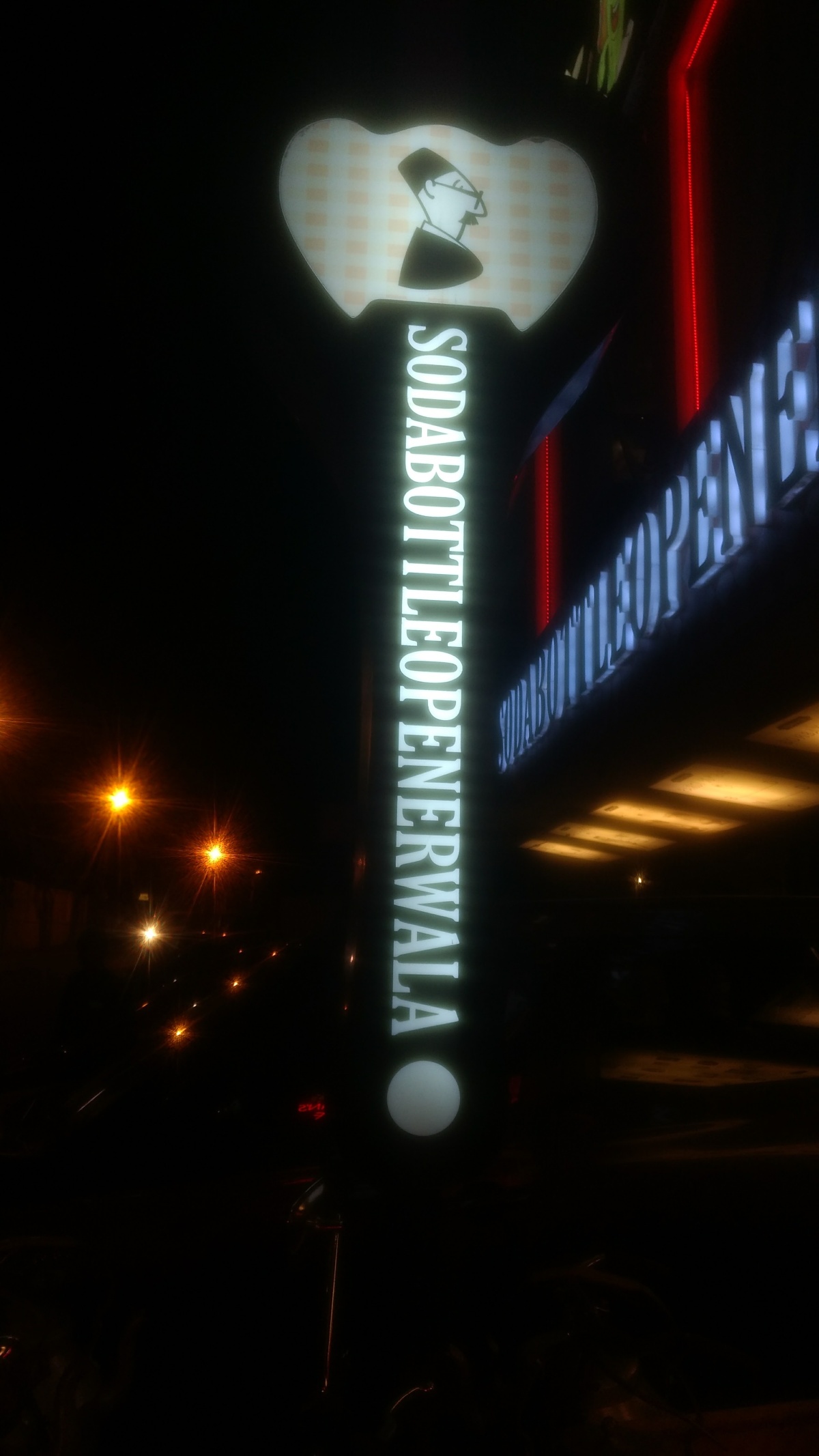 We had to wait at sodabottle too – but this was way more organized. They had taken our number and we had the queue position updated over text messages. The usher was professional – she was neither rude nor built castles in the air regarding availability of a table. After a good 20 minutes waiting and chatting outside the restaurant, we got a table. 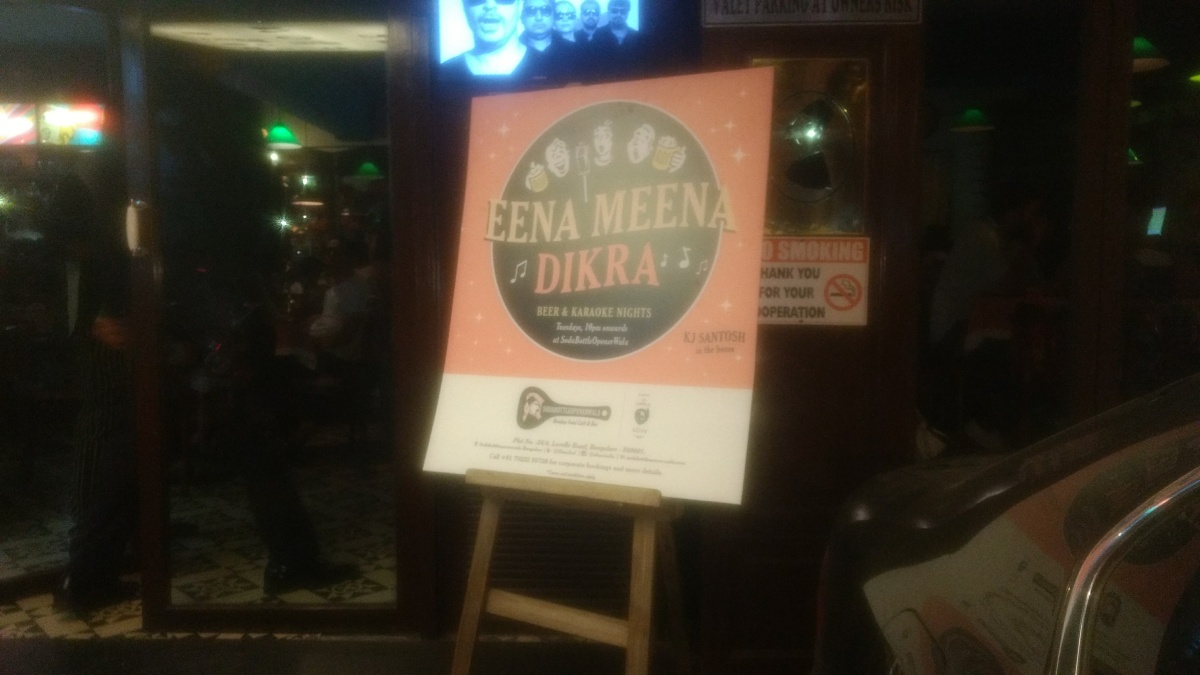 I am not sure if such a thing as Parsi humour exists, but if there is one the guys at sodabottleopenerwala are full of it. And it is everywhere – the menu, the cheeky sign outside, the bathroom and in the decoration on the walls. You might miss some of the jokes, if you are not aware of the Parsi culture – but some are just plain funny to everyone. Check out the one on the drinks menu on the choice a Parsi takes between Parkinson’s and Alzheimer’s. Slightly dark but funny nevertheless. There is another one regarding the right way to cook something, I don’t remember which dish, and the reply is “All 120,000 Parsis cannot be wrong about this.” It made me chuckle. Beside the entrance to the bathroom they have a sign that lists the don’ts of the restaurant. One rule was ‘no farting’. ROFL, I wonder if there is another restaurant that can do this and get away with it. The ambience is very much Indian (Parsi, Mumbai-ish one might say, but that is getting too specific) with the desi caricatures and Indian style lights. My one complaint was that the tables were way too small. It made eating a little uncomfortable at times, considering the number of dishes we had and the length to which Aditya can extend his legs.

Check out the kind of serving dishes used – our main course was served in a vintage tiffin box and our appetizers in aluminium boxes, which I’ve seen people using to store pan and sometimes money. Very retro and awesome attention to detail. The music played at sodabottle was offbeat too –  Vintage Hindi film music. I had scant idea of the songs played – but wife and Pallavi were able to recognize all of them, and the delight increased with each number. The volume also increased with the hour, but unlike the Western beats at other places, this was not annoying. Some of the patrons were doing a sing-along as well, which gave a very endearing feel to the entire place. I’ve listed some of the songs at the end of the post.

Let us get to the food and drink. We were all pretty famished and rattled off our orders. Wife went for the Salad Shirazi and Chilli Cheese Pav. Pallavi and Aditya by policy do not eat vegetarian outside and chose the Chicken Farcha and the Chicken Baida Roti. I assumed this should cover everyone and just added a Saria Papad to the order. We did not experiment too much with drinks – Pallavi and I opted for a Heineken and a Bud, wife took the Bumsuckerwala and Aditya abstained! Tummy problem it seems. [:P]

The fried chicken (farcha) landed first. I found it to be very oily for my sensibilities, but then fried chicken is like pizza – even when bad it is good. This one was definitely not bad, but I tried only one piece. The baida roti was the superstar of the night – supposed to be a paratha, it was cut into little pieces like puff. The chicken kheema, the eggs and the superb baking gave all of us an instant foodgasm and were left wishing it would never end. Definitely try this when you visit the place. The chilli cheese pav gave some stiff competition – the pav made by the restaurant themselves, and the superbly mild flavor of the cheese and the masala left me wondering if I had ever had a better pav. Nope, that would be the answer.

The salad and the bumsuckerwala were both damp squibs, nothing much to say about either. Wife said that the salad did not have any veggies at all – it did look like a thick green forest. I did not taste the drink, but I guess it was a suckerwala. The saria papad was also nothing special, just like any other rice papad you make at home.

I never knew Sanjay Dutt had interests in cooking – the menu lists Paneer Sanju Baba as a recipe that the actor had shared with a restaurant in Mumbai. The description is interesting, and wife picked this for her main course with Berry Pulav (veg). I did not taste the paneer but all of us had the pulav – by this time, it looked like the chefs in the kitchen were looking to outdo each dish they were sending out to us. The pulav was tantalizing if anything, with the gravy filling in the middle of potatoes and berry.

By now, if  I’m going to say anything positive about the dhansak chicken, you’re going to think sodabottle is paying me. No they’re not and yes, the dhansak chicken was out of the world too. Boneless chicken in gravy went superbly with the Berry Pulav. I loosened my pants and tucked in. The caramelized rice tasted slightly bitter, my mother in law has made better stuff at home – a Sindhi recipe. But then, together we managed to finish off everything and everyone was full – and replete and happy.

Check out SodaBottleOpenerWala if you are interested in delicious Parsi food, an Indian ambience and in the mood for vintage Bollywood songs. They will not disappoint you on any of those counts.

Some of the songs they played

25/4, Opposite Harley Davidson Showroom, Lavelle Road, Bangalore
Phone no – +91 7022255299
My review for SodaBottleOpenerWala on Zomato